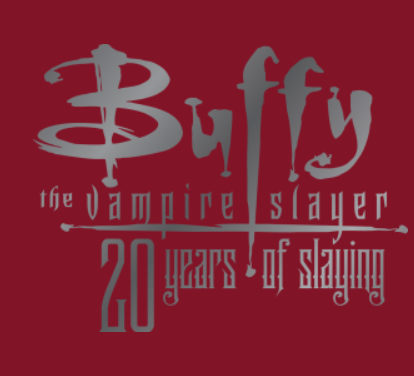 Plus, on the anniversary, fans can tune-in to relive the two-part premiere episode on Pop (to find your channel go to (Poptv.com) on March 10th at 9 AM ET/PT.

We Talked Buffy with Spike- Our Interview with James Marsters 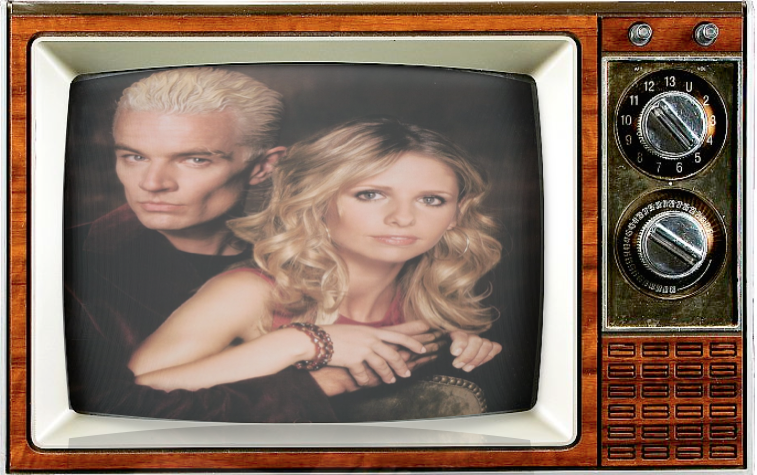 In addition, BoxLunch, a pop culture gift and novelty gift store with a cause, has partnered with 20th Century Fox Consumer Products to mark next week’s 20th Anniversary of Buffy the Vampire Slayer with an exclusive promotion across all their U.S. retail locations and online website. While simultaneously helping to provide meals to those in need, BoxLunch celebrates the beloved series with an assortment of products that include never-before-seen themed apparel, accessories, jewelry, and books. The merchandise will hit shelves and BoxLunch.com on March 10, 2017 and to fulfill their charitable mission, for every $10 spent in-store or online, BoxLunch helps to provide a meal to a person in need via their philanthropic partner Feeding America.

On March 10th the Sunnydale High Yearbook Contest launches across the United States. With a prize of a trip to San Diego Comic Con fans will be rewarded for uploading their high school class photos — and providing their best Buffy caption in the form of a “senior quote”. Participants will be able to share their submissions across their Facebook and Twitter feeds. Contest details and rules will be found on BoxLunch.com

Additionally, the best-selling recent release, Buffy the Vampire Slayer Adult Coloring Book, is the inspiration for “drawing in” fans eager to wish ‘Team Buffy’ a Happy Anniversary. On Friday, a selection of complimentary designs from the Buffy the Vampire Slayer Adult Coloring Book will be unveiled on the BoxLunch & official Buffy Facebook pages, allowing Buffy enthusiasts to color and submit personal anniversary messages. Using the hashtag #BuffySlays20 fans are encouraged to share their designs and messages across social media, sending it to those responsible for the beloved series:

“Decades after its television debut, Buffy the Vampire Slayer continues to stake its ground in pop culture,” said Jim Fielding, President of Consumer Products and Innovation at 20th Century Fox Consumer Products. “As one of the studio’s most memorable programs, we are thrilled to celebrate the show’s 20th anniversary alongside the devoted Buffy fan community.”

Releasing throughout the anniversary year, Fox Consumer Products reveals a wide-range of licensing partners. Highlights below and selection of downloadable images here.

·       From Jasco, the Buffy the Vampire Slayer: The Board Game where players must help Buffy The Vampire Slayer protect Sunnydale from the forces of evil in this fully cooperative board game. (Available Now) 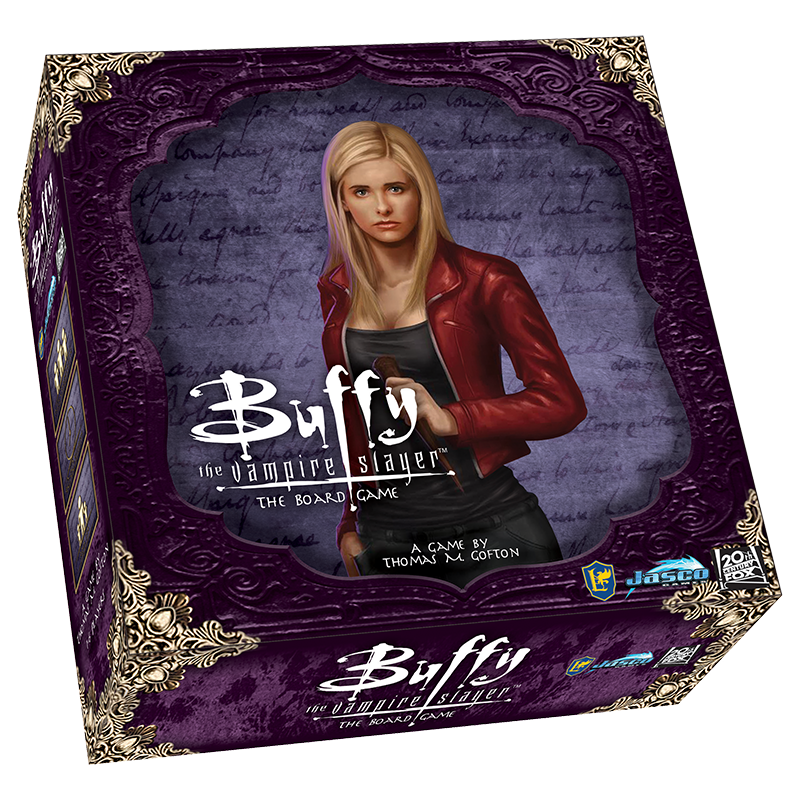 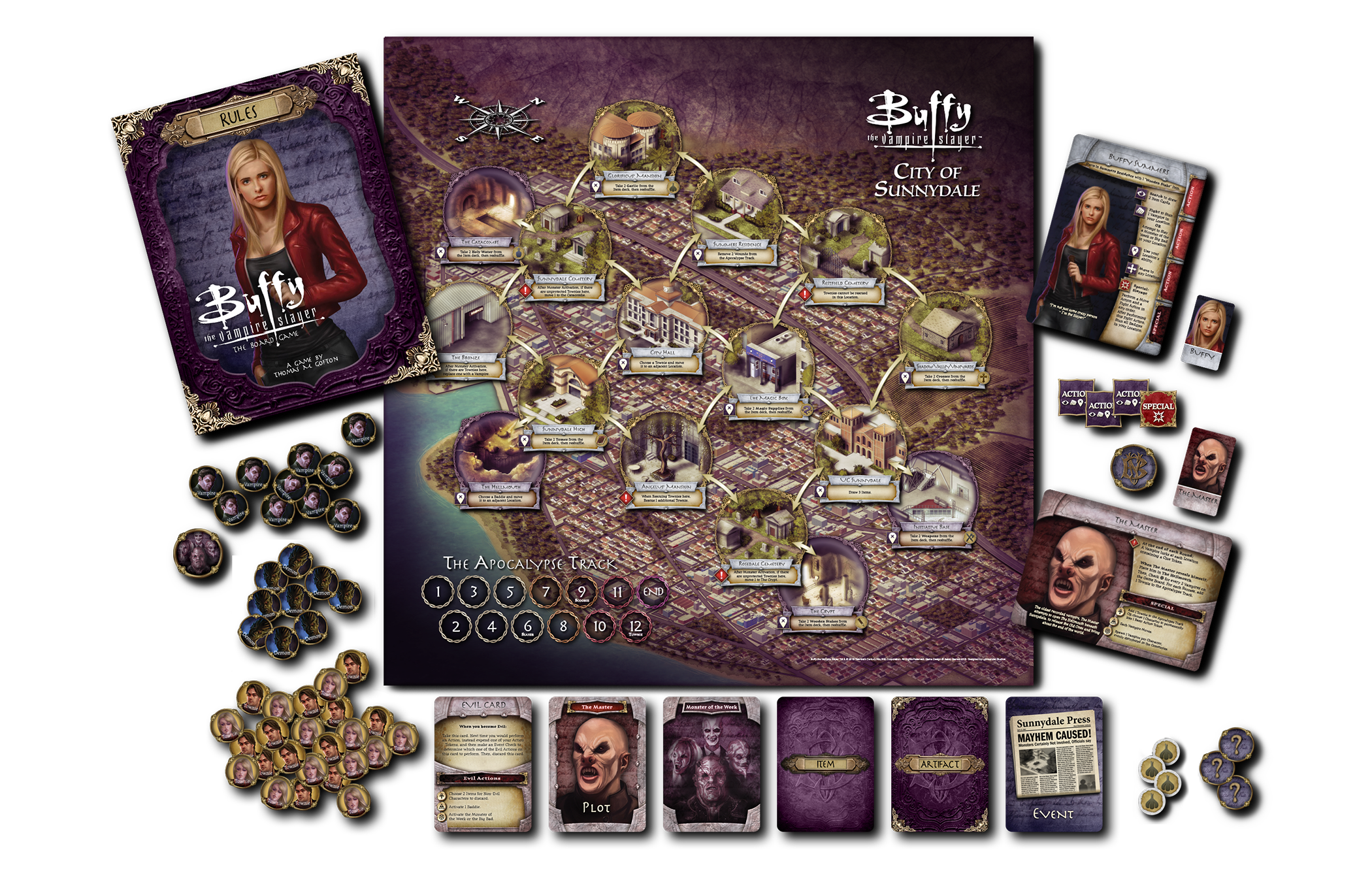 ·       Hot Topic, the retail destination for music and pop culture-inspired clothes and accessories, plus fashion apparel for girls and guys, is celebrating 20 years of slaying with AC/DC Apparel.  Together they are unveiling a unique fashion collection available exclusively on Hottopic.com this summer.  The collection will celebrate the style of beloved Buffy characters, including Willow’s iconic 90s sweater, and a long trench coat inspired by Buffy Summers herself, as well as tops featuring iconic lines from the series. 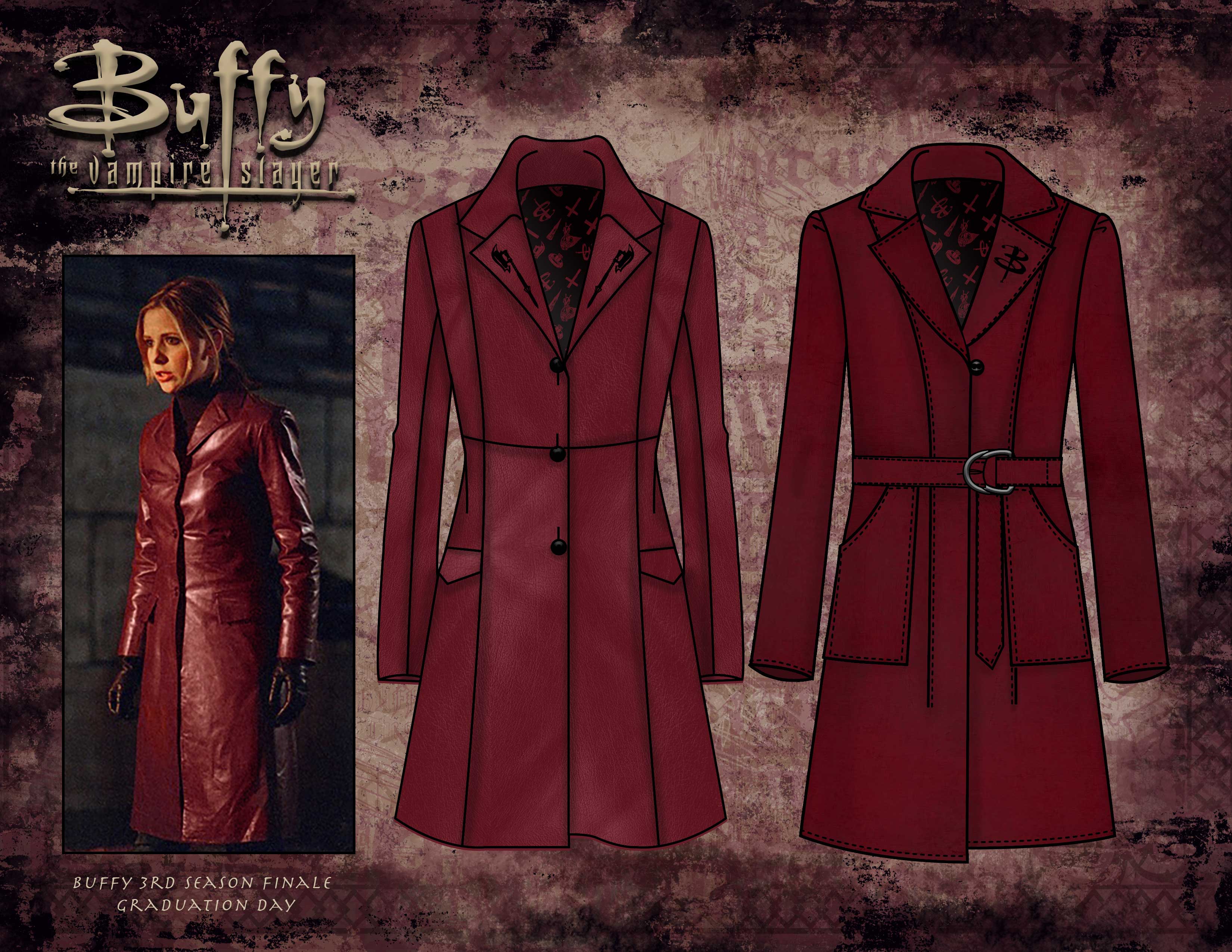 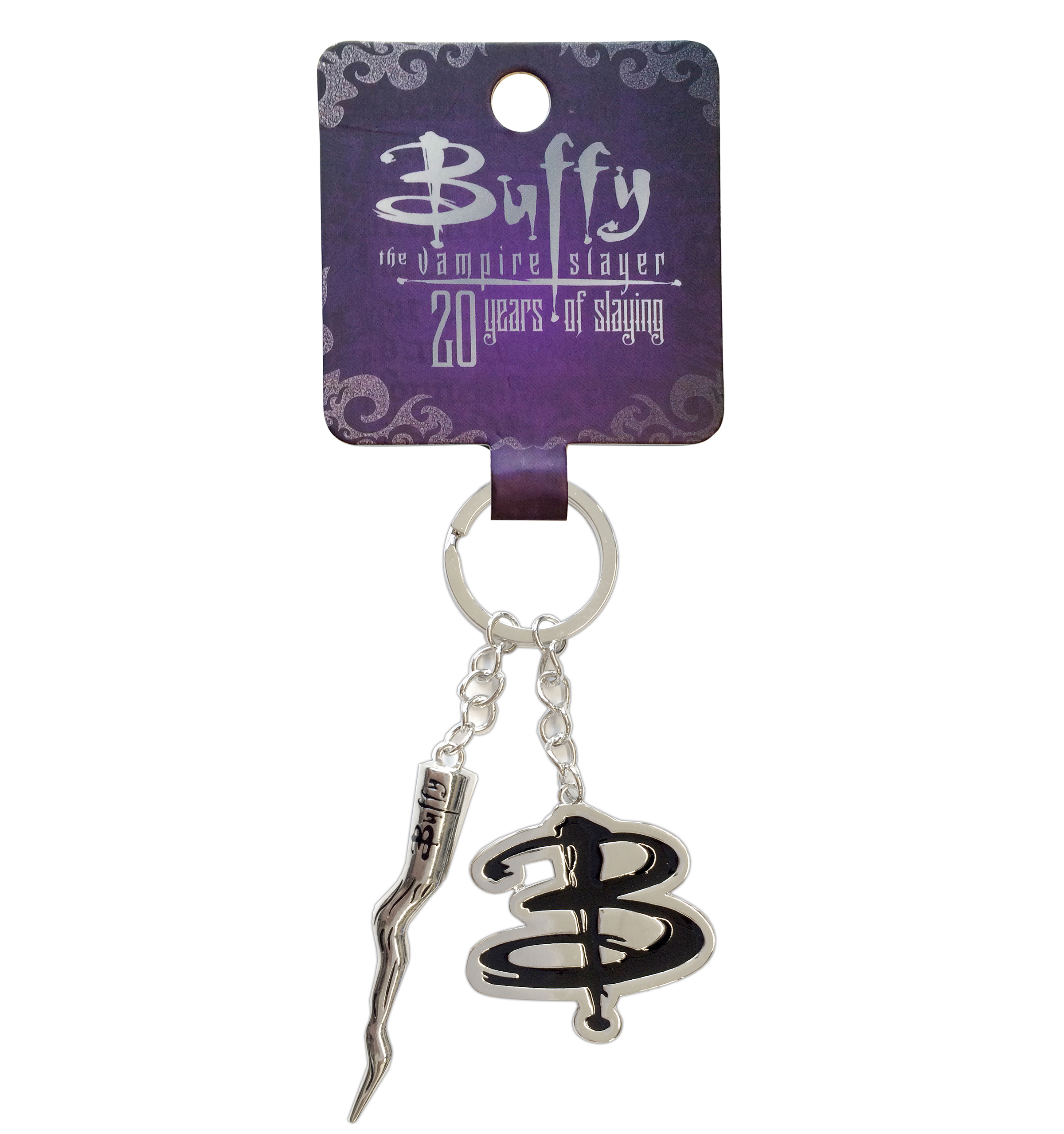 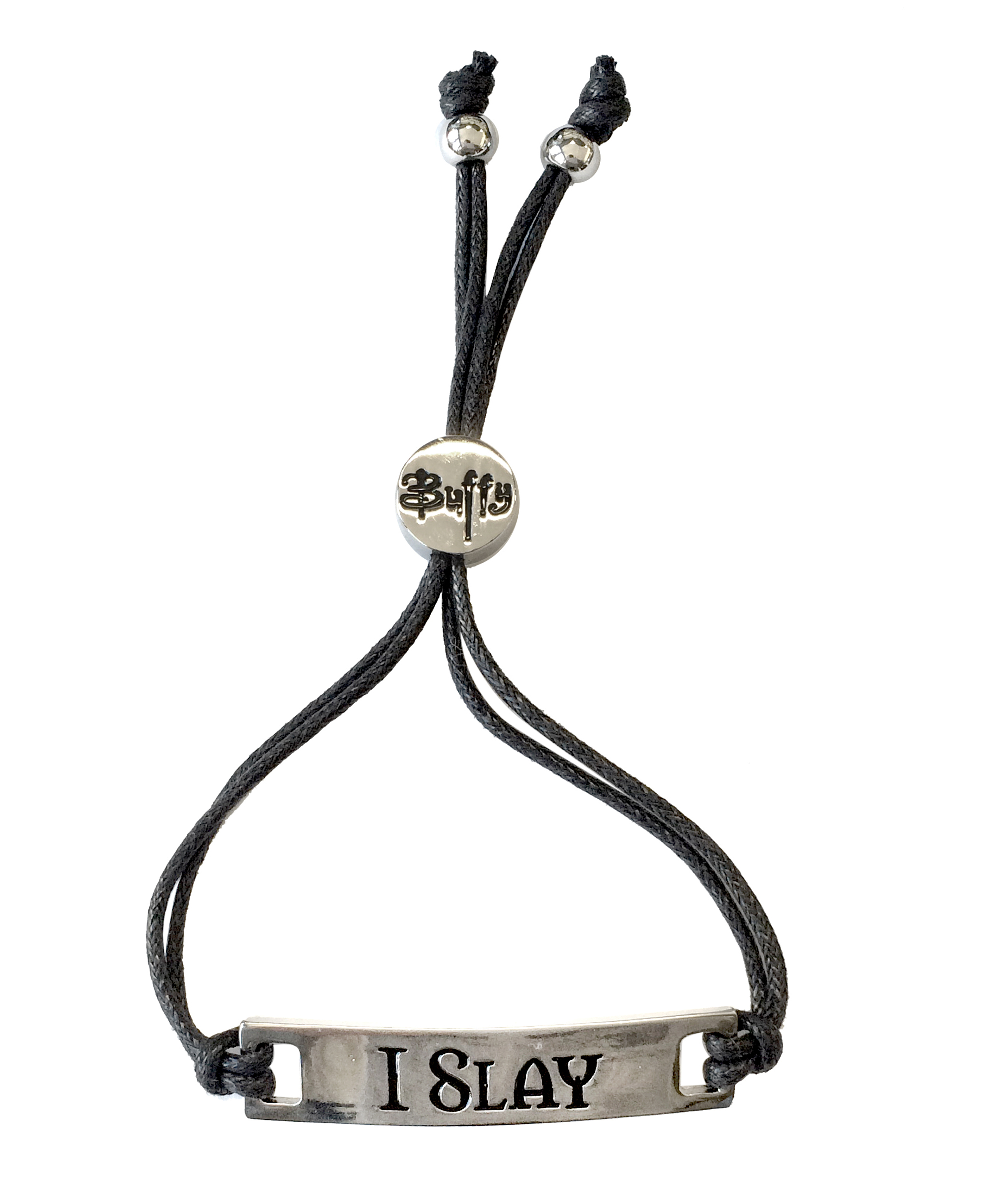 ·       The team of imaginative pop culture fanatics at Ripple Junction have locked themselves in the library and studied up on the last 20 years of fandom celebrating Buffy.  Ripple Junction has developed a full line of tees for young men and women available at major retail outlets, as well as ripplejunction.com and Amazon.com (Available Now).

·       Longtime publishing partners, Dark Horse and Simon & Schuster plan new books and comics that will release during the anniversary year, with highlights that include:

o   Buffy the Vampire Slayer Adult Coloring Book (Dark Horse/Available Now) – your favorite characters and moments from the Buffy television series are all represented in this engrossing adult coloring book. 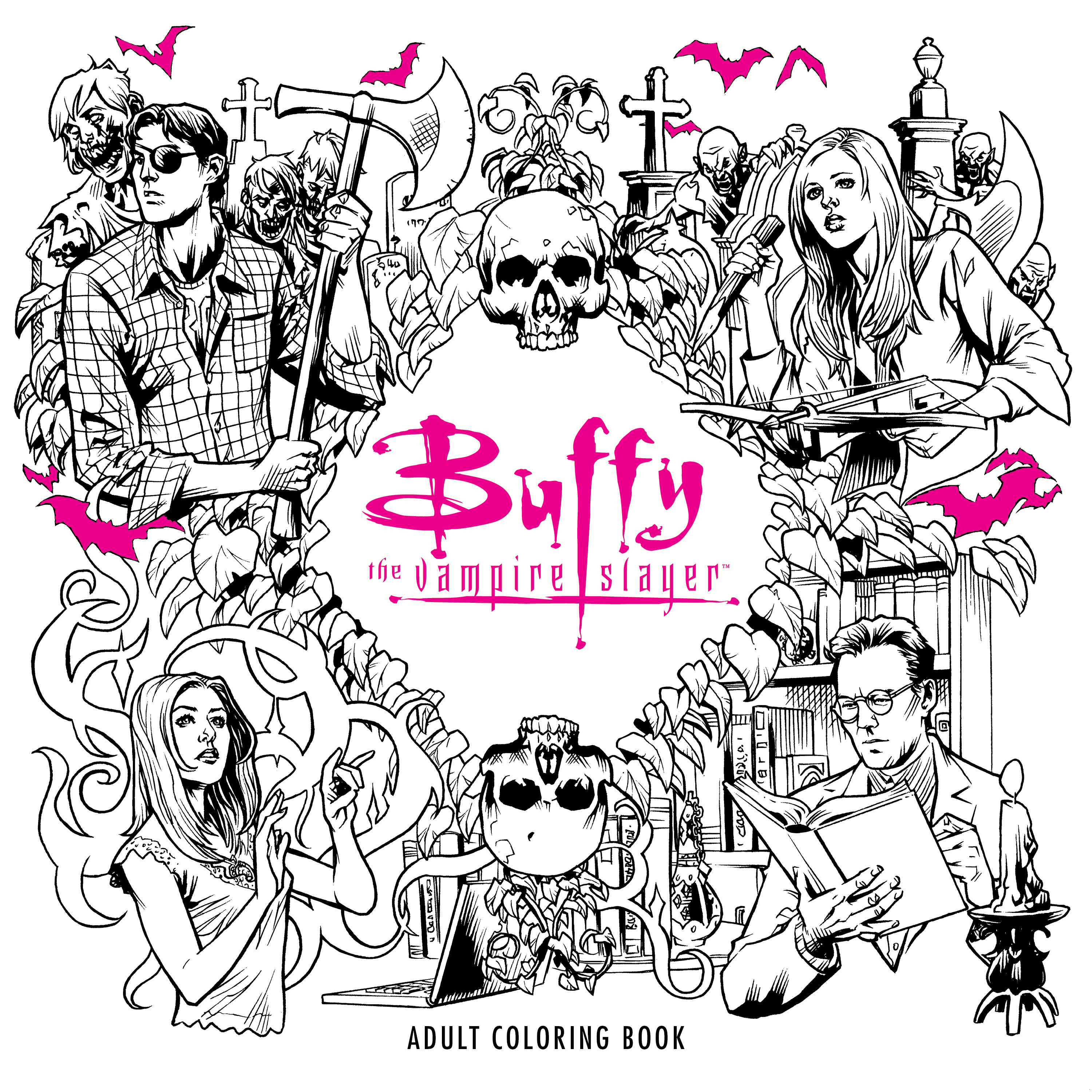 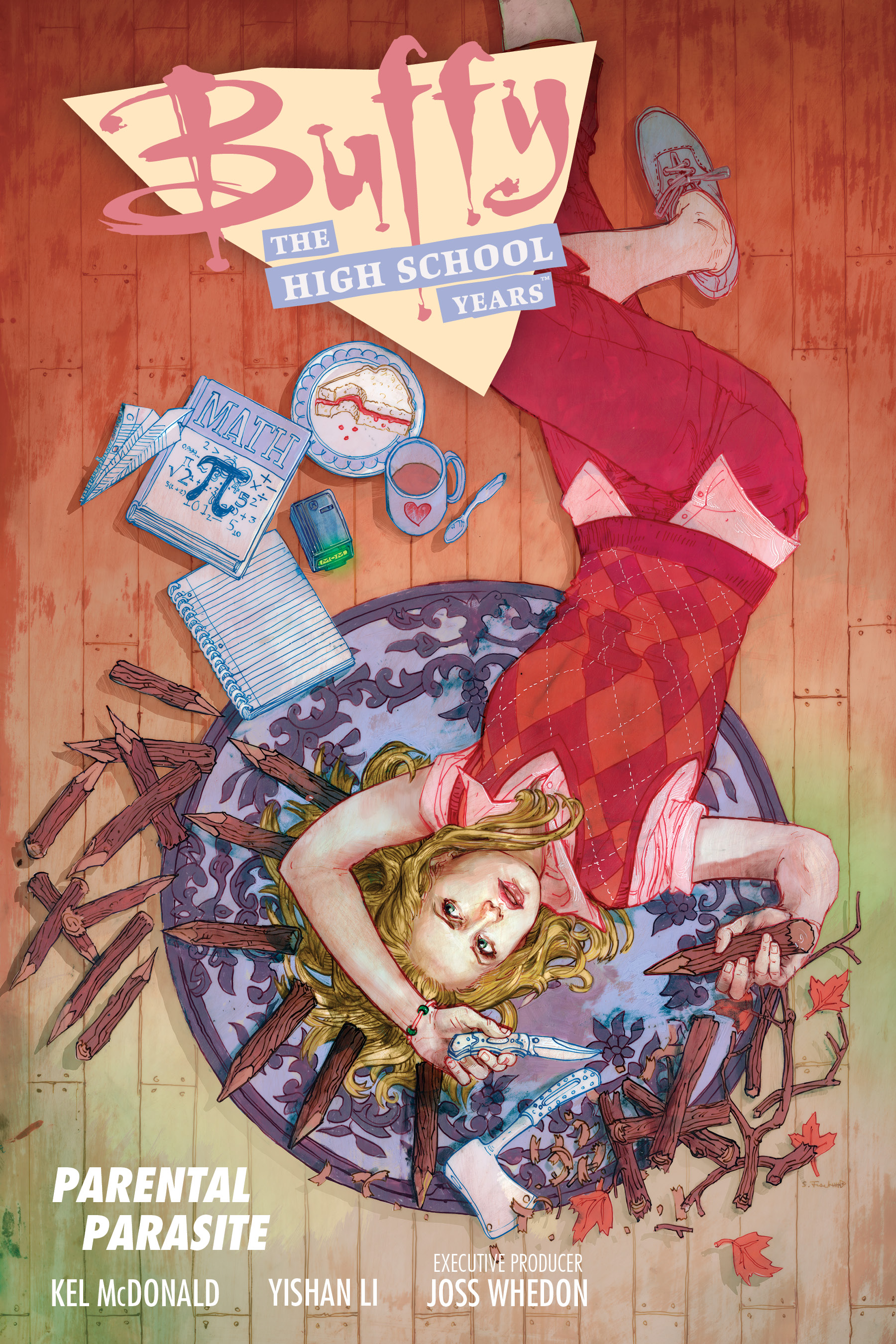 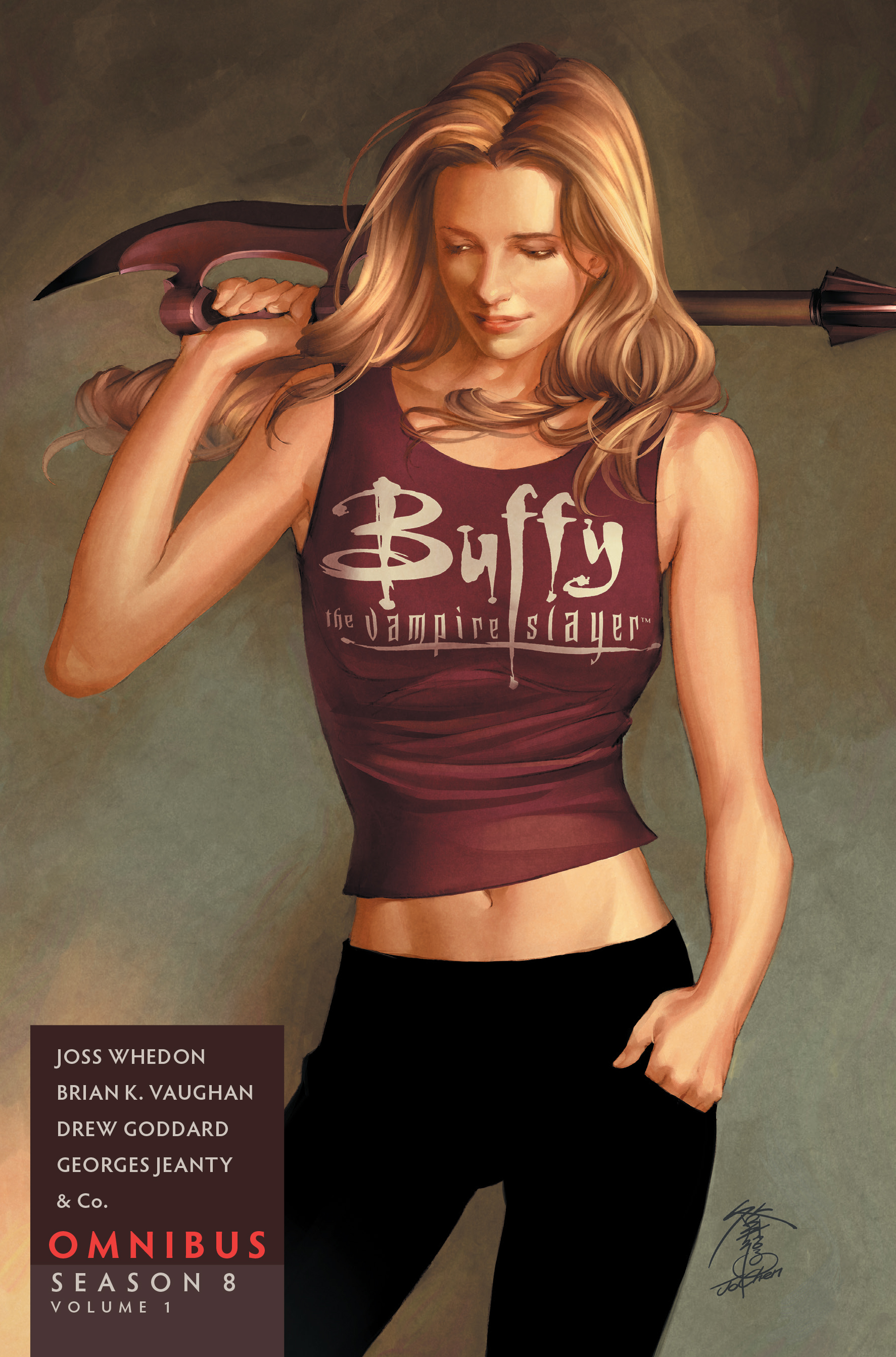 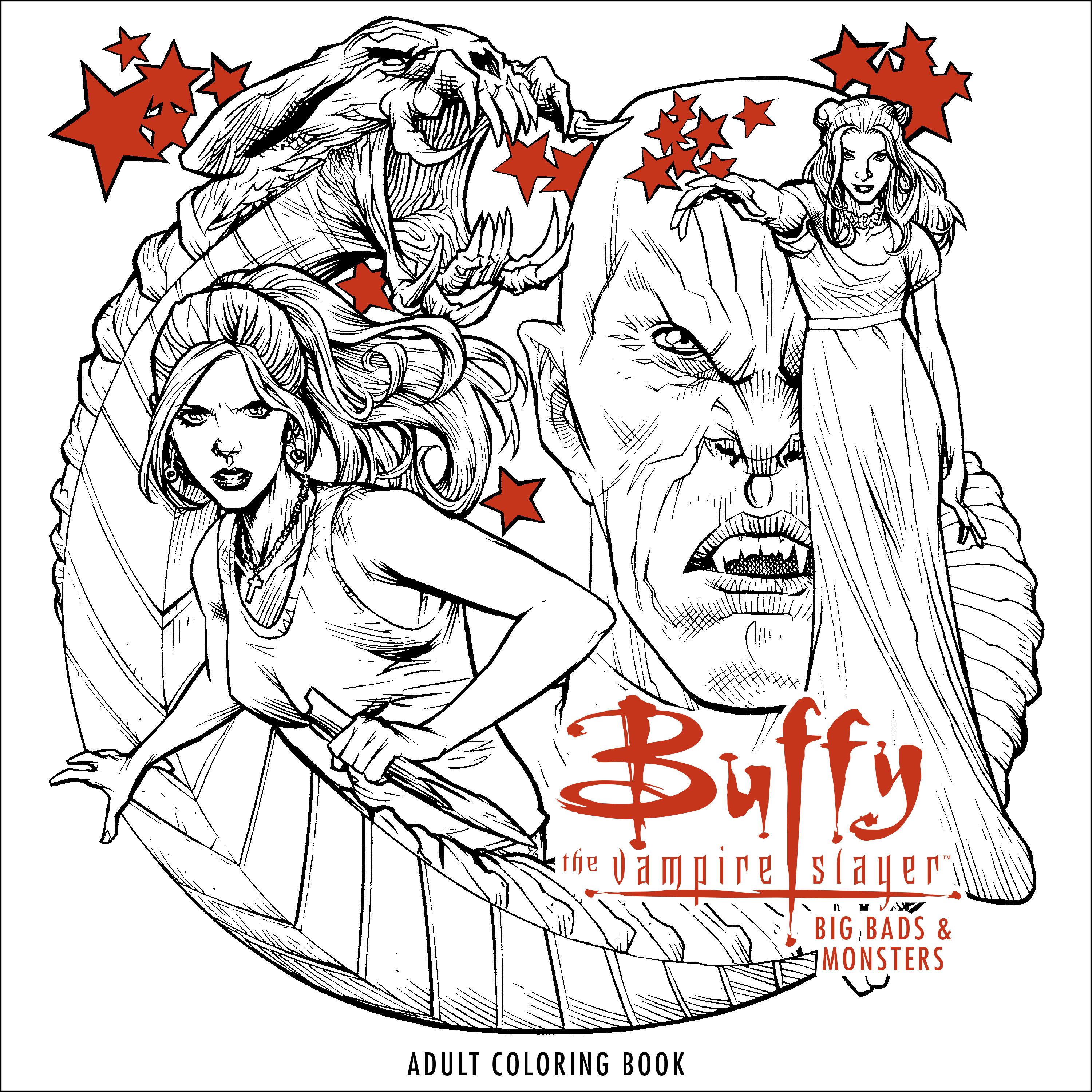 ·         Insight Editions and Harper Design will release several books and novelty items in celebration of the anniversary, including:

Buffy the Vampire Slayer Encyclopedia: The Ultimate Guide to the Buffyverse (Harper Design/September 2017) is a lavishly produced and written book by Buffy experts and is the authoritative source for fans, allowing them to indulge in the intricacies and nuances of the series as never before.  This authorized companion is a must-have for all Buffy enthusiasts as this full-color A-to-Z encyclopedia catalogs, explains, and cross-reference every detail of the Buffyverse, from characters, locations, and weapons to episodes, demons, and recurring gags.

Buffy the Vampire Slayer: The Official Grimoire (Insight Editions/October 2017) is the first and only truly comprehensive collection of every magical moment from all seven seasons of Buffy the Vampire Slayer, humorously narrated by beloved resident witch Willow Rosenberg. Completely illustrated and annotated by the rest of the gang, this book of spells is a unique keepsake for fans of the Buffy-verse and an incredible celebration of the show’s 20-year legacy.

Buffy the Vampire Slayer: The Definitive Visual Handbook (Insight Editions/October 2017) is a one-of-a-kind infographic guide to all things Buffy, blending striking illustrations with a bounty of facts and stats that shed light on just about every aspect of the show. Full of fun insights and surprising details about the lore, characters, quips, and most legendary episodes, battles, and villains, this refreshing take on the Buffy-verse will delight fans old and new.

Buffy the Vampire Slayer: Vampire Hardcover Ruled Journal (Insight Editions/August 2017) includes a section of text adapted from the original Slayer Handbook before giving way to blank ruled pages. Atmospheric, engrossing, and designed with a dynamic in-universe aesthetic, this blank ruled journal invites readers to add their own story to the legacy of the Slayer.

·       From Upper Deck, Legendary: A Buffy the Vampire Slayer Deck Building Game for 1-5 players.  Slayers must work together to recruit powerful heroes, build their decks and take down the Big Bad once and for all.  (Available August 2017)

·       At the core of SG@NYC there’s isn’t a Hellmouth. There is a dedicated team of people who truly believe fashion is about design; but not just design you have to add the team, the suppliers, the designers and of course the fans!  SG@NYC is creating a jewelry and accessory line for the celebration of the 20 years Buffy Summers has been slaying! (Available Soon)

·       Surreal Entertainment has answered the Calling to provide only the most iconic and unique Buffy must haves, essential for any true Slayer. With a full line of drinkware, desktop accessories, fleece blankets, and much more, any nearby force of darkness would be a fool to cross your path…except to compliment you on your cool gear! Check out your local retailers and get prepared…for battle or complete Buffy fandom! (May 2017)

About Buffy the Vampire Slayer

The series, created by Joss Whedon, premiered on the WB Network on March 10th, 1997. Buffy the Vampire Slayer, the Emmy and Golden Globe-nominated series, which ran for seven seasons from 1997-2003, stars Sarah Michelle Gellar as Buffy Summers. Chosen to battle vampires, demons and other forces of darkness, Buffy is aided by a Watcher who guides and teaches her as she surrounds herself with a circle of friends called the “Scooby Gang.” 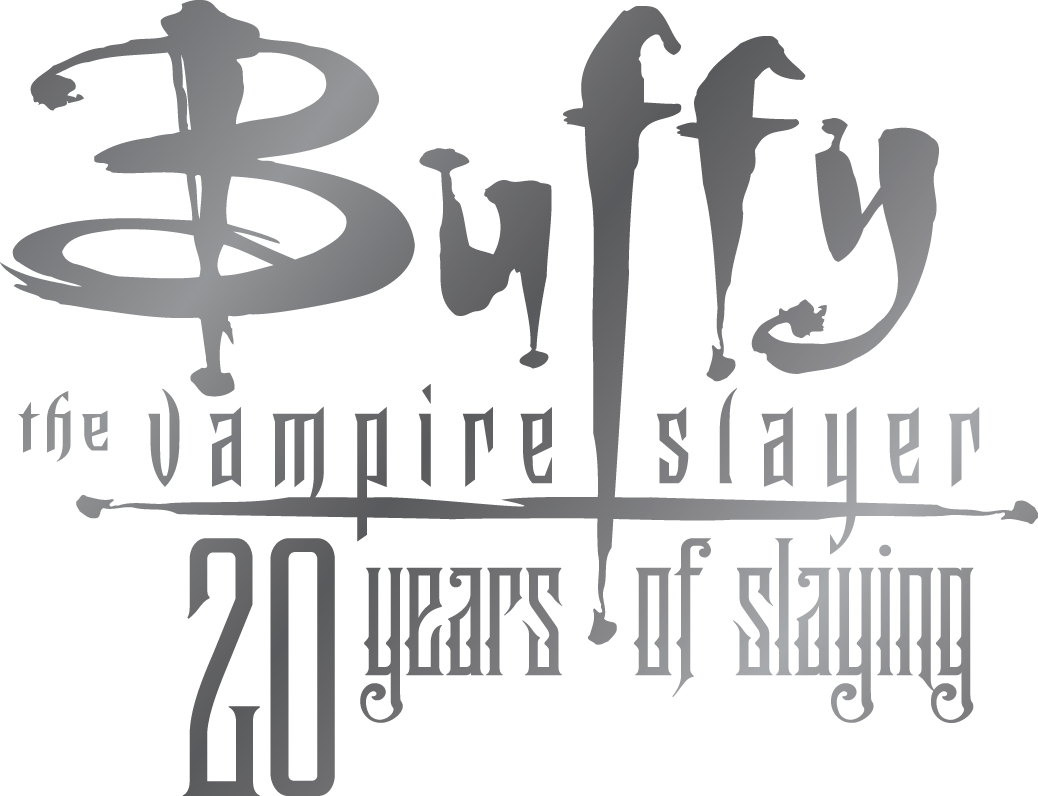 BoxLunch is a specialty retailer offering a curated collection of licensed pop culture merchandise. With every $10 spent across the retailers’ themed product offering of apparel, accessories, home goods, gift and novelty, and collectibles BoxLunch will provide a meal to a person in need through its philanthropic partnerships. To join the movement and help in the fight against hunger visit BoxLunch in-store or online at www.boxlunch.com to learn more on how you can get involved in your local community. BoxLunch is headquartered in CA and currently operates 50 stores throughout the US. For more information please visit our e-commerce website and Facebook or follow us on Twitter and Instagram.