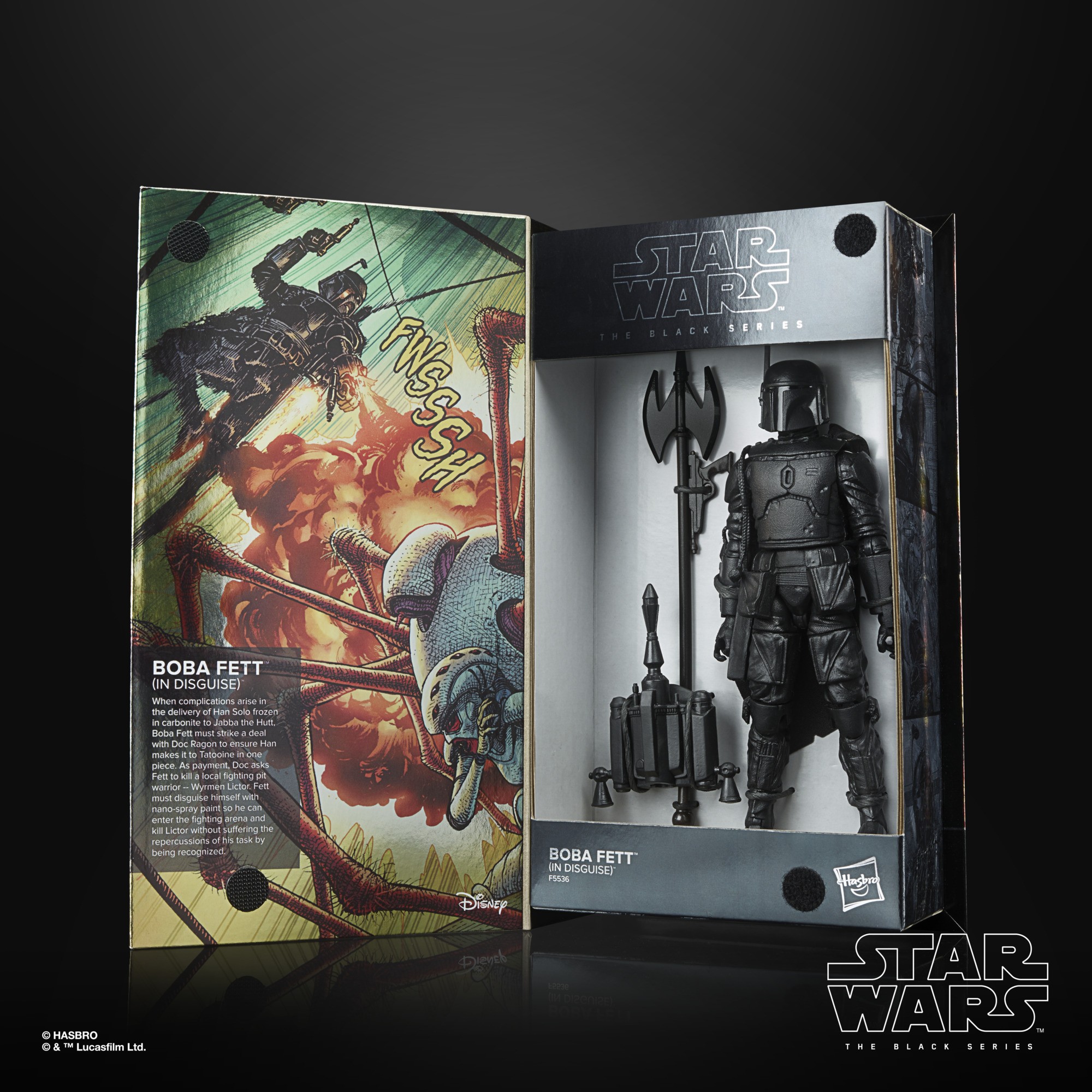 PAWTUCKET, R.I.–(BUSINESS WIRE)–Hasbro, Inc. (NASDAQ: HAS), a global play and entertainment company, will return to San Diego Comic-Con International, bringing an extraordinary portfolio of brands, including Transformers, Dungeons & Dragons, Magic: The Gathering, NERF, G.I. JOE and Power Rangers, as well as products from premier collaboration brands, including Star Wars™ and Marvel from The Walt Disney Company. Hasbro’s 2022 lineup will be showcased throughout the convention to deliver an epic experience for fans of all ages with several product exclusives, panels, autograph signings and more activities show-goers don’t want to miss.

Hasbro is debuting the first-ever toy line from the famed fantasy franchise, Dungeons & Dragons, at the convention, so fans can have the chance to get up close and personal with the new products. The all-new Hasbro Selfie Series action figures are also making a debut at the event, giving fans the opportunity to preview Hasbro Selfie Series figures, with a select number of fans being among the first to create and purchase their figures, shipping Fall 2022. SDCC (San Diego Comic Convention) attendees should visit the Hasbro Pulse Info Desk in Booth #3213 to obtain a ticket for an assigned time slot.  Limited tickets available, distributed on a first-come, first-served basis.

Additionally, Hasbro is partnering with Save the Children to offer a Buy One, Give One donation. For every item purchased on HasbroPulse.com from July 20 – August 31, the ultimate fan destination will donate a toy or game to Save the Children, benefitting Ukrainian refugees with up to 100,000 toys and games.

Hasbro is also offering two San Diego Comic-Con 2022 exclusive products: the Star Wars The Black Series Boba Fett™ (In Disguise) action figure and G.I. JOE Classified Series Dr. Mindbender. Starting Wednesday, July 20 at 5:30 PM PT, attendees can visit the Hasbro Booth #3213 to receive a one-time use code, which can then be scanned for preorder on HasbroPulse.com.

The following boasts Hasbro’s jam-packed programming at its booth and brand panels. San Diego Comic-Con attendees are encouraged to check the schedule posted in Hasbro’s information booth each day for updates and follow @Hasbro on Twitter, as well as @Hasbro & @HasbroPulse on Instagram for the latest happenings.

In celebration of the 15th anniversary of the first live action film, TRANSFORMERS, Hasbro will engage fans with trivia sessions, premium giveaways and more. Photo opportunities with Bumblebee as the 1977 Camaro, a replica car from the 2007 movie, will be available each day. The beloved voice talent of Optimus Prime, Peter Cullen, will join for a special poster signing session on Saturday.

In addition to 15th anniversary Studio Series product display, the team will have a live unboxing of the Transformers: HasLab Victory Saber, a first look and reveal of the next Transformers Generations Shattered Glass Hasbro Pulse exclusive character, and Legacy and Transformers: EarthSpark product will also be on display. The Hasbro panel will also share a sneak peek at some of the biggest Transformers product reveals of the year:

Join the Transformers product team as Ben (Hasbro Marketing) and Evan (Hasbro Design) take attendees through some all-new Transformers: Legacy toy reveals! The team will also hold a Q&A to discuss all things Transformers, pop culture, and whatever burning questions fans have always had for the team! So, get ready for a panel that’s… More Than Meets the Eye.

Additionally, SDCC attendees can meet the next generation of heroes from the new original animated series, Transformers: EarthSpark, at the show’s first-ever San Diego Comic-Con panel. From Nickelodeon and Entertainment One, this all-new Paramount+ Original Series will showcase an insider event that celebrates a new take on the iconic global franchise and proves families come in all shapes and sizes. The panel – featuring the series voice talent including Danny Pudi (Bumblebee), Kathreen Khavari (Twitch), and Zeno Robinson (Thrash), along with co-executive producer Dale Malinowski and executive producer Ant Ward – will showcase a behind-the-scenes look at art, casting and never-before seen clips, as well as a first look at the Hasbro toyline inspired by the series that is…More Than Meets The Eye. Following the panel, the toyline will be on display in Hasbro’s booth. Panel moderated by Mike Cecchini, Editor-in-Chief, Den of Geek. Friday, July 22, 2:15 p.m. – 3:15 p.m. (Room: 6A)

Hasbro is bringing the leading roleplaying game Dungeons & Dragons to life at San Diego Comic-Con with the premiere of the franchise’s first-ever toy line! Ahead of the highly anticipated movie by Paramount and eOne, Hasbro will engage fans with even more lore to add to their favorite RPG. More details, including the first products to launch, will premiere on July 21.

The product line is inspired by Dungeons & Dragons: Honor Among Thieves, which premieres only in theaters March 2023 and brings the rich world and playful spirit of the legendary roleplaying game to the big screen in a hilarious and action-packed adventure.

To bring the magic to life at this year’s San Diego Comic-Con, Paramount Pictures and eOne will host a one-of-a-kind Tavern Experience to give fans a real-life sneak peek into the new movie, Dungeons & Dragons: Honor Among Thieves. The Tavern, located in the heart of the Gaslamp Quarter on the corner of Sixth Avenue and Island Avenue, features a 20-minute, immersive experience for unique photo ops and exclusive takeaways. Follow @dungeonsanddragonsmovie for the latest updates.

Stop by the Hasbro booth for a signing with Mark Rosewater, the head designer for Magic: The Gathering, as well as the branded panel for the latest updates on the groundbreaking fantasy franchise:

Magic head designer Mark Rosewater presents this one-man program in which he re-creates his daily blog, answering the audience’s questions about the making of the popular trading card game and revealing new, never-before-seen cards, mechanics, and more from the upcoming Unfinity release.

The NERF brand’s first-ever official mascot, MURPH, will make their live debut at the Hasbro booth bringing their fun, playful and social personality to the convention. Over the past few weeks, MURPH has gone viral on social media and launched their own Twitter account, @MurphFromNerf. The already beloved mascot is stepping from the digital world to the real world at SDCC to meet fans IRL for the first time!

Additionally, NERF will announce a highly anticipated new product. Attendees will have the opportunity to see the new item for the first time in the Hasbro booth.

Whether you’re team Joe or a secret member of Cobra, everyone can agree that G.I. JOE’s new Classified Series toy line is an absolute hit! Join Emily and Lenny from the development team to hear never-before shared behind-the-scenes secrets, get a sneak peek into the future of Classified Series, and learn more about the first G.I. JOE Classified Series HasLab. Make sure to attend… because knowing is half the battle!

Join Patrick Schneider, Chris Reiff, & Jing Houle from the Hasbro Marketing & Design teams as they discuss the popular Hasbro Star Wars line, including the Black Series and The Vintage Collection. Attendees will get an in-depth look at Hasbro’s latest action figure and premium roleplay offerings from throughout the saga. Word on the Holonet™ is there may also be a few surprises.

Join the Legends team at the Hasbro panel for some eye-popping product reveals and surprises.

Launching this fall partnership with the National Basketball Association (NBA) and National Basketball Players Association (NBPA) the Starting Lineup brand will feature legendary NBA superstars as part of its first wave of figures and will be available for pre-order starting September 22 exclusively on Hasbro Pulse and across the Fanatics network of online sites, including Fanatics.com and official league stores.

The Starting Lineup brand developed a massive following by bringing sports enthusiasts figures of their favorite superstar players accompanied by a trading card for more than a decade.

Who do you think will make the Starting Lineup?

Hasbro (NASDAQ: HAS) is a global play and entertainment company committed to making the world a better place for all children, fans and families. Hasbro delivers immersive brand experiences for global audiences through consumer products, including toys and games; entertainment through eOne, its independent studio; and gaming, led by the team at Wizards of the Coast, an award-winning developer of tabletop and digital games best known for fantasy franchises MAGIC: THE GATHERING and DUNGEONS & DRAGONS.

The company’s unparalleled portfolio of approximately 1,500 brands includes MAGIC: THE GATHERING, NERF, MY LITTLE PONY, TRANSFORMERS, PLAY-DOH, MONOPOLY, BABY ALIVE, DUNGEONS & DRAGONS, POWER RANGERS, PEPPA PIG and PJ MASKS, as well as premier partner brands. For the past decade, Hasbro has been consistently recognized for its corporate citizenship, including being named one of the 100 Best Corporate Citizens by 3BL Media and one of the World’s Most Ethical Companies by Ethisphere Institute. Important business and brand updates are routinely shared on our Investor Relations website, Newsroom and social channels (@Hasbro on Twitter, Instagram, Facebook and LinkedIn.)

STAR WARS and related properties are trademarks and/or copyrights, in the United States and other countries, of Lucasfilm Ltd. and/or its affiliates. © & TM Lucasfilm Ltd.