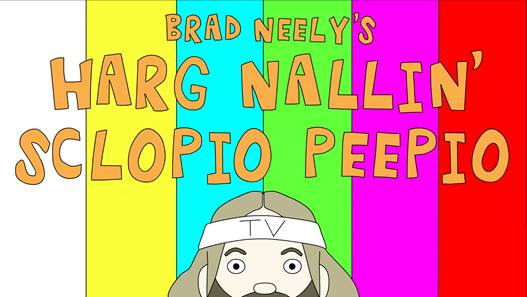 But What Does It Mean?

An In-Depth, Hard-Hitting Creator Interview Reveals Everything About

Brad Neely was one of our first Saturday Morning Cereal guests (still a favorite) Click Here and travel back in time!

Brad Neely’s Harg Nallin’ Sclopio Peepio is a new quarter-hour animated sketch show created by Neely that features a collection of frenetic one-off bits, shorts, and songs, all filtered through Neely’s signature visual style. Beware, however, as this show hates you.

Neely sat down to reveal Harg Nallin’ secrets in this exclusive Q&A:

Q: What does Brad Neely’s Harg Nallin’ Sclopio Peepio mean, is there any sort of inspiration for it?

A: It’s intentionally meaningless. We tried some titles that had meaning. This one just made us laugh – it was our favorite collection of syllables.

Q: Can you tell us a little bit about the show? What can people expect?

A: They should expect endless variety. Lots and lots of little bits crammed into a show. Lots of music. We have a dedicated cast for the whole season. There’s myself, there’s Ilana Glazer, Affion Crockett, Darrell Hammond and Gabourey Sidibe.

A: We have one guest star per episode. We have Father John Misty, Lizzo, Jeffrey Tambor, Chelsea Peretti, Christine Shaw, Mary Elizabeth Winstead and Andre 3000.

Q: Are there any favorite recurring characters?

A: Fruit Blood! It’s a band. They show up in a few, six or seven, episodes I guess. They do a lot of songs in a cellar. They wear colorful clothes. Some mix of bondage plus Mardi Gras sort of aesthetic, you know?

Q: How big of a role does music play in the series outside of Fruit Blood?

A: I made about a hundred songs for the show. About 60-70 made it into the 10 episodes. It’s a huge part of the show. This show for me is an opportunity to make a lot of music and have fun people sing my songs.

Q: So it’s not just you singing, cast members jump in as well?

Q: When does the show air?

Q: Would that be Monday, technically? July 10? It was 12:15 a.m.? They’re giving us a lot of mixed messages here. So you wake up on Sunday and you don’t go to sleep until you watch the show.