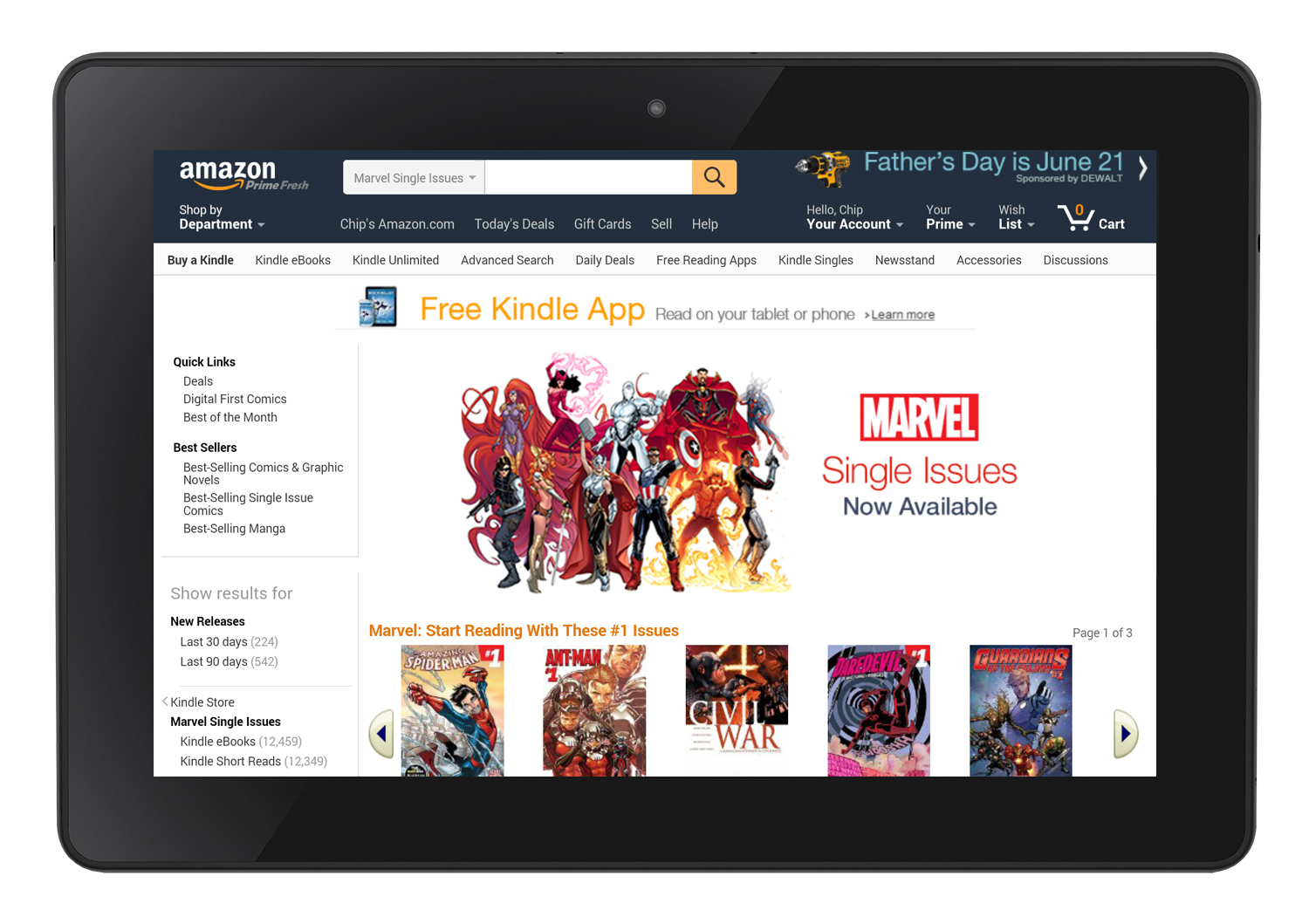 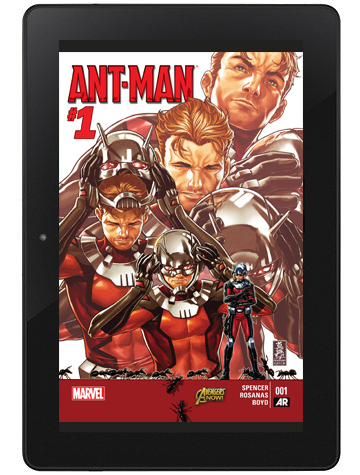 “After Amazon’s acquisition of comiXology in April of 2014, we collectively saw a great opportunity to expand our relationship and create more ways for fans to access Marvel’s vast library of characters as well as leverage comiXology’s technology, together with Amazon’s incredible consumer focus and reach,” said Peter Phillips, EVP of Interactive and Digital Distribution at Marvel Entertainment.

“Marvel, comiXology and Amazon are committed to bringing Marvel’s amazing stories to current and future Marvel fans across the globe,” said David Steinberger, CEO of comiXology. “And this historic extension of our relationship with the expansion of Marvel’s single issues to Amazon’s Kindle platform is an enormous opportunity to reach more fans.”

Under the new agreement, comiXology will continue to distribute Marvel’s English language single issue, trades and graphic novels via the comiXology apps on Fire tablets, iPhone, iPad, Android devices and the web at comixology.com.  ComiXology will also continue to power the Marvel Comics app for iPhone, iPad and Android devices as well as the Marvel Digital Comic Shop. What’s new for fans and readers is that over 12,000 single issue digital comic books will become available for sale on the Amazon Kindle Store on June 18, 2015 and will be available on theAmazon Kindle platform around the world.

“Amazon, comiXology and Marvel share a passion for expanding the audience for comic books and graphic novels worldwide,” said David Naggar, Vice President, Amazon Kindle. “With the ever-increasing number of devices in consumers’ hands and the growing popularity of Marvel’s extensive catalogue of familiar Super Heroes we see this as the perfect time to create a whole new generation of comic book readers.”

Since Marvel and comiXology first worked together to create the Marvel Comics app for iPhone, iPad, and Android devices, the Marvel apps for these platforms have had a combined 15 million downloads. The Marvel Comics app has been the #1 grossing book app for iOS in 2015 and the #1 grossing app in the Comics Category in the Google Play app store for 2015. New fans, across all demographics, attracted to Marvel’s amazing characters through top-grossing movies, critically-acclaimed TV series, and ground breaking new publishing series have driven titles likeDaredevil, Spider-Gwen, and Rocket Raccoon to record sales, alongside perennial favorites like Ultimate Spider-Man and Avengers. 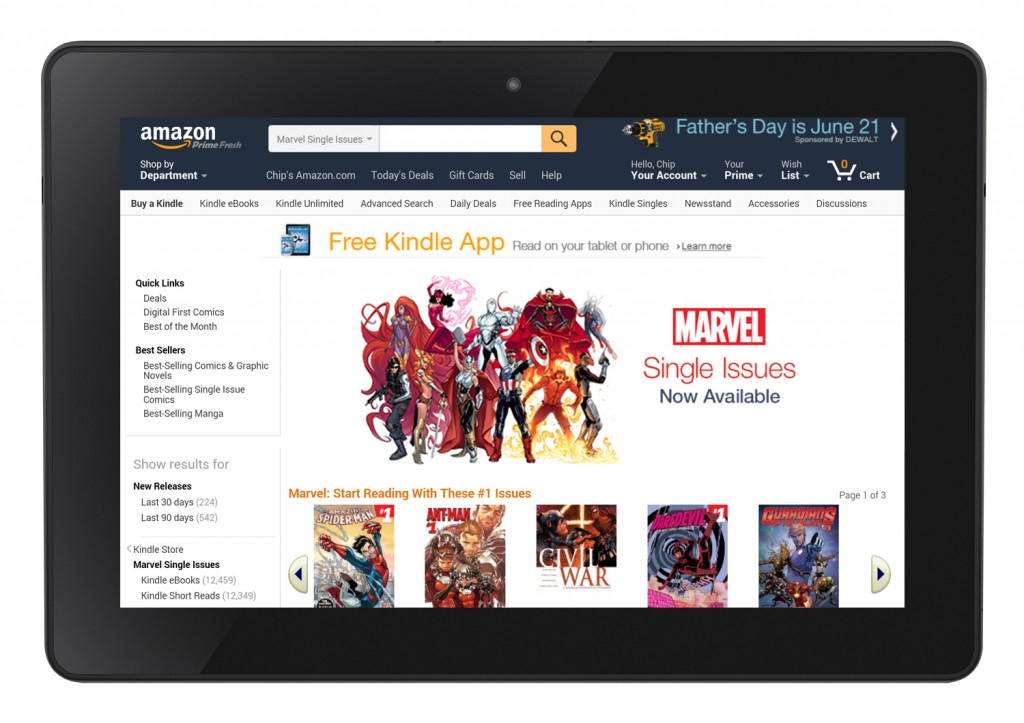 Marvel Entertainment, LLC, a wholly-owned subsidiary of The Walt Disney Company, is one of the world’s most prominent character-based entertainment companies, built on a proven library of more than 8,000 characters featured in a variety of media over seventy-five years.  Marvel utilizes its character franchises in entertainment, licensing and publishing.

ComiXology, an Amazon.com, Inc. subsidiary (NASDAQ:AMZN), has revolutionized the comic book and graphic novel industry by delivering a cloud-based digital comics platform that makes discovering, buying, and reading comics more fun than ever before. ComiXology’s Guided View reading technology transforms the comic book medium into an immersive and cinematic experience, helping comiXology become a top ten grossing iPad app in 2011 and 2012 and the top grossing non-game iPad app in 2012 and 2013. Offering the broadest library of comic book content from over 75 publishers – and independent creators as well – comiXology will not stop until everyone on the face of the planet has become a comic book fan. ComiXology is based in New York City, with operations in Seattle, Los Angeles and Paris.

About Amazon
Amazon.com opened on the World Wide Web in July 1995. The company is guided by four principles: customer obsession rather than competitor focus, passion for invention, commitment to operational excellence, and long-term thinking. Customer reviews, 1-Click shopping, personalized recommendations, Prime, Fulfillment by Amazon, AWS, Kindle Direct Publishing, Kindle, Fire phone, Fire tablets, and Fire TV are some of the products and services pioneered by Amazon.