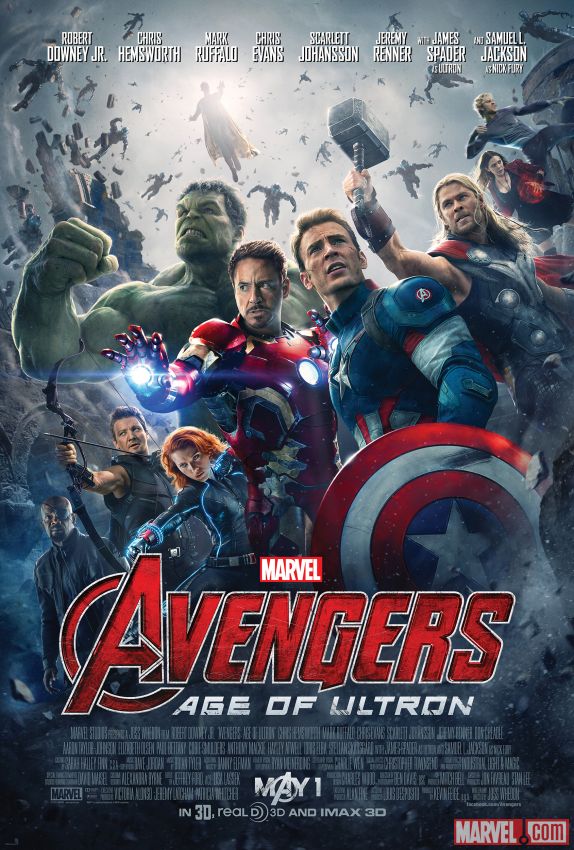 I’ve always been a devout Avengers fan. There’s something about having a team of kick-ass characters in one book. Earth’s Mightiest Heroes, best-of-the-best, with a roster that could change at any time. Just about every hero in the Marvel Universe got an Avengers membership card.

When the first Avengers flick came out in 2012, I was nervous, muttering in line “please don’t suck” over and over like a maniac. I had faith. Still. Something I cherished as a kid was coming to life and if it was terrible I would go into a geek rage spiral. Thankfully, it did not suck.

Now, Marvel Studios continues to print money and expand on their cinematic universe. Obscure titles like Guardians of the Galaxy smashed in the box office. Sequels for Cap, Thor, and Iron Man all upped the ante and left fans wanting more. Now, we have more, and the band is back together.

Avengers: Age of Ultron jumps on the screen full-throttle. The heavy hitters are back and laying waste to the remnants of HYDRA, trying to cease their shenanigans once and for all. The team is fluid, working as one unit, and cracking wise while delivering new levels of ass kickery.

To even the playing field, HYDRA has created a few “enhanced” players of their own: Pietro and Wanda Maximoff, aka Quicksilver and Scarlett Witch (comic fans know these two as first recruits to the team). The twins have major beef with the Avengers and are itching for a reckoning.

So, what about this Ultron guy? Our team financier and stylist, Tony Stark, has created an Iron Legion- automatons serving as foot soldiers and crowd control. Stark wants to put a “suit of armor” over the world so our heroes can quit their day job. He’s taking it a step further by tinkering with artificial intelligence called… wait for it… Ultron! James Spader utilized performance capture and gave life to the mad robot with a serious “Cats In The Cradle” vibe.

Once the plan goes to hell and Ultron becomes self-aware, it thinks destroying humanity sounds like a swell idea. After teaming up with the Twins (because, of course) they wage war against our Avengers and it’s a hell of a ride.

Action is cranked up across the board. I was smiling wide, eyes darting around the screen trying to soak it all in. Visually, it’s a ballet of destruction.

You could fit the plot in a few comic panels. Some of the bigger transitions (side quests, speedy ethical debates, love interests) were dropped in your lap as we hurry to the next fight scene. I didn’t mind, I understood the ride when I bought the ticket. Still, the contrived trappings of film like Age of Ultron can be avoided with just a dash of fleshed out story. There’s decades of source material. Maybe we cut a few seconds of the Hulk punching buildings. Thankfully, Joss Whedon is able to keep the story on its feet while delivering iconic moments and giving each character a time to shine. You get a hero highlight reel as they flex their muscles and posterize the bad guys.

Dialogue and cast chemistry is tight, unique. Even when the gang is down, there’s still a sense of hope. They pick each other up. You see light at the end of the tunnel.

For my money, the team MVP goes to Jeremy Renner’s Hawkeye. He had the best lines and delivered them with precision. After being under Loki’s juju in the first film, Hawkeye ends up keeping the film grounded. He’s not a super soldier, billionaire genius, rage monster genius, or alien demigod… he just has a day job.

While the Avengers string together a knockdown, drag-out against Ultron and his crew, a few new faces emerge and the team has never looked better. You could call it a vision of greatness.

Avengers: Age of Ultron treats its heroes and villains with care, everyone gets a moment in the spotlight. The film hits all fanboy expectations. If anything, it over delivers. Fancy problem for true believers.

Another triumph for Marvel. Another gift for the fans.